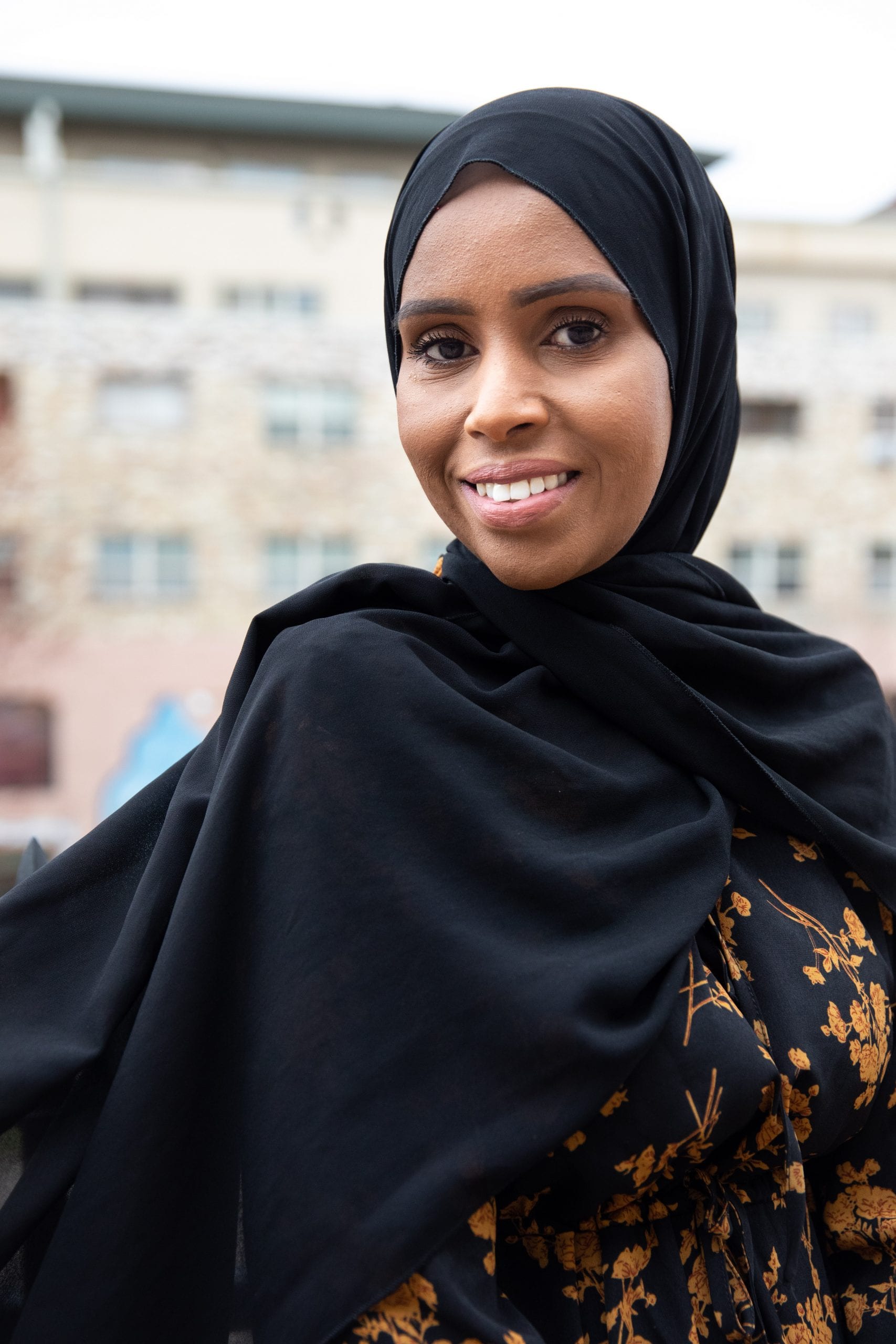 Back to the MSP in Color Library

I was born in Somalia, raised in Yemen, flourished in California’s Bay Area and now I’ve settled in Minneapolis, Minnesota. My family left Somalia after the Civil War broke out in 1991 and settled here in 2001. I myself moved to MSP in June, 2015, after meeting the father of my children. So, I’ve lived here permanently for almost seven years.

I now have two girls, I’m settled, I don’t think I will move back. A part of me would love to move back to California, but it’s really expensive in the Bay Area and it’s gotten worse and worse over the years. So, MSP is a perfect place where you can live comfortably, where you can raise children.

I am a teacher. I have been teaching for the last 13 years. This year I’m teaching first grade and last year I was teaching kindergarten at a school called Al-Amal.  It’s the only Islamic school in the metropolitan area.

How was your initial adjustment to living in Minnesota?

I am a California girl, so the weather was the biggest adjustment. It is cold in MSP, but it was easy to adjust after a while. The other thing that was a little bit hard, is that the Bay Area is very diverse, we call it the melting pot. MSP is also very diverse – there are a lot of people from all over the world – however the different groups do not mix much. It’s very segregated, but it’s getting a lot better now.

How did the murder of George Floyd impact you and your community?

The murder of George Floyd brought a lot of people closer to each other. It happened only about 10 blocks away from my house. It was a tough few weeks for anyone who lived in the city of Minneapolis. But it was refreshing to see the younger generation standing up for what is right, regardless of race or background or religion. It is tragic that it happened that way, that someone had to lose their life for people to see that they aren’t so different from the person it just happened to. That they need to stand up for what’s right and speak up.

There is actually a huge Somali population here in MSP. It was so wonderful to see my community come out and support the protests because of the injustices that the African American community faces in this country. It formed a bond between groups and I’m glad to see that. That’s one thing that I missed the most about the Bay Area, living in a place where you call everyone a friend or family. Here, it’s starting to become that way, which is great news. They say that every bad event also has at least one positive outcome. People in MSP are getting closer, forming a bond and standing up for one another.

As a mother raising two young Black girls, it was hard to witness that murder and to know that the odds are against them. But now that we’ve seen justice being done and people standing up for other people and rooting for Black Lives Matter, that gives me hope that the world is going to be a better place. It might take us a very long time, but one day, people will look past color and religion and where you’re from, and just see the person for who they are. Hopefully, we’re praying for that.

How did your family make it out of Somalia?

There were six of us kids when the civil war broke out and my mother was pregnant with the seventh. We had to get separated from our father and walk for three days. At six years old, I was the oldest, so my mother was carrying an infant while the rest of us kids walked. My dad had worked for UNICEF, he’d made some TV appearances and was a well-known man, so he didn’t want to risk being seen with us. We walked for three days to a meeting point.

When the night fell, I remember my mom knocking on someone’s door and asking them if we could sleep inside or outside their house. Anywhere we could take refuge. Eventually we met our dad and drove to Kismaayo, a southern border town, where we were fortunate to be able to leave the country right away to go to Kenya. We were in Kenya for a few months and then my dad decided that we should move to Yemen and settle there for a few years. Later we were able to apply for asylum in the U.S. which is what brought me to California.

Unfortunately, my father passed away in 2000 in a car accident and my mom relocated to MSP with the rest of my siblings. I am the oldest of 10.

My mom is a hero. She was very young to go through that trauma by herself. I have two kids now – one is six and one is four – and I can’t imagine walking for more than 45 minutes without them throwing a tantrum or sitting on the ground, let alone walking while hearing gunshots in the middle of a war zone and dragging six kids while you’re pregnant.

What do you love about life in MSP?

Minnesota is a beautiful state, that’s for sure. I like having four seasons and seeing the weather change. It’s breathtaking. The winters are harsh, but it is a beautiful place to be during the winter when it snows. There are a lot of parks here as well, especially coming from California. There are also a lot of lakes of course – we are the 10,000 lake state – and I enjoy taking a walk around the lake on a summer evening, when the sun is setting. That’s something that I truly cherish here.

I also like seeing my own people. There’s a huge Somali community and I like being able to raise my daughters here and teach them about their heritage and their history. When we go to the Somali mall, everyone speaks their mother tongue. It’s amazing, I love it!

What do you think could improve about MSP?

Putting those walls down when it comes to different groups here in MSP. Like I mentioned before, there’s still a lot of segregation where the Somalis keep to themselves, the Hmong – to themselves, the African-Americans and the whites – to themselves. It’s getting better, but it would be great to have the communities merged together and be strong allies.

Where do you find a sense of community in MSP?

With the Somali community for sure. It’s amazing to see so many Somalis here, especially coming from California where we didn’t see that many. Also, at the school where I work, we’ve grown to be one big family.

How did the COVID-19 pandemic affect you and your community?

The pandemic was tough. The Somali community is naturally very social and for that to be taken away from them was very hard. For the elderly, to be told that they need to stay at home and avoid socializing was hard. They aren’t as tech savvy as we are, they can’t Facetime someone as easily, they need that human interaction. I think COVID hit hard within the Somali community because a lot of people were still socializing and, of course, COVID was spreading. So, it was painful to hear of a lot of deaths and people being sick.

Keeping the kids active was the hardest part for me. Thank God COVID started in March, so the weather was getting better. Over the summer we were able to get out of the house and take long walks outside. It was hardest when the winter hit and there was nowhere to go.

I got COVID myself. Praise the Lord it wasn’t as hard as I thought it would be. My daughters tested negative, so I had to quarantine in my house by myself while they went to their father’s house. It was just me alone in this house, which was hard. (SMILES)

What advice would you give to somebody considering to move to MSP?

It is a great place with tremendous opportunities! There is an opportunity for anyone in any field to grow here in MSP. It’s a great place to raise a family, it’s a great place to come as an entrepreneur and start a business. If all these immigrants who just arrived to the United States have succeeded in all of these businesses, then anyone can do it. Sky’s the limit for you when you live in MSP!

Coming from the Bay Area, it’s a great place to live from an economic perspective. MSP is a great place for first-time homebuyers. There is a lot here for you, for anyone who wants to come. Just bear with the weather, you’ll get used to it. (LAUGHS)